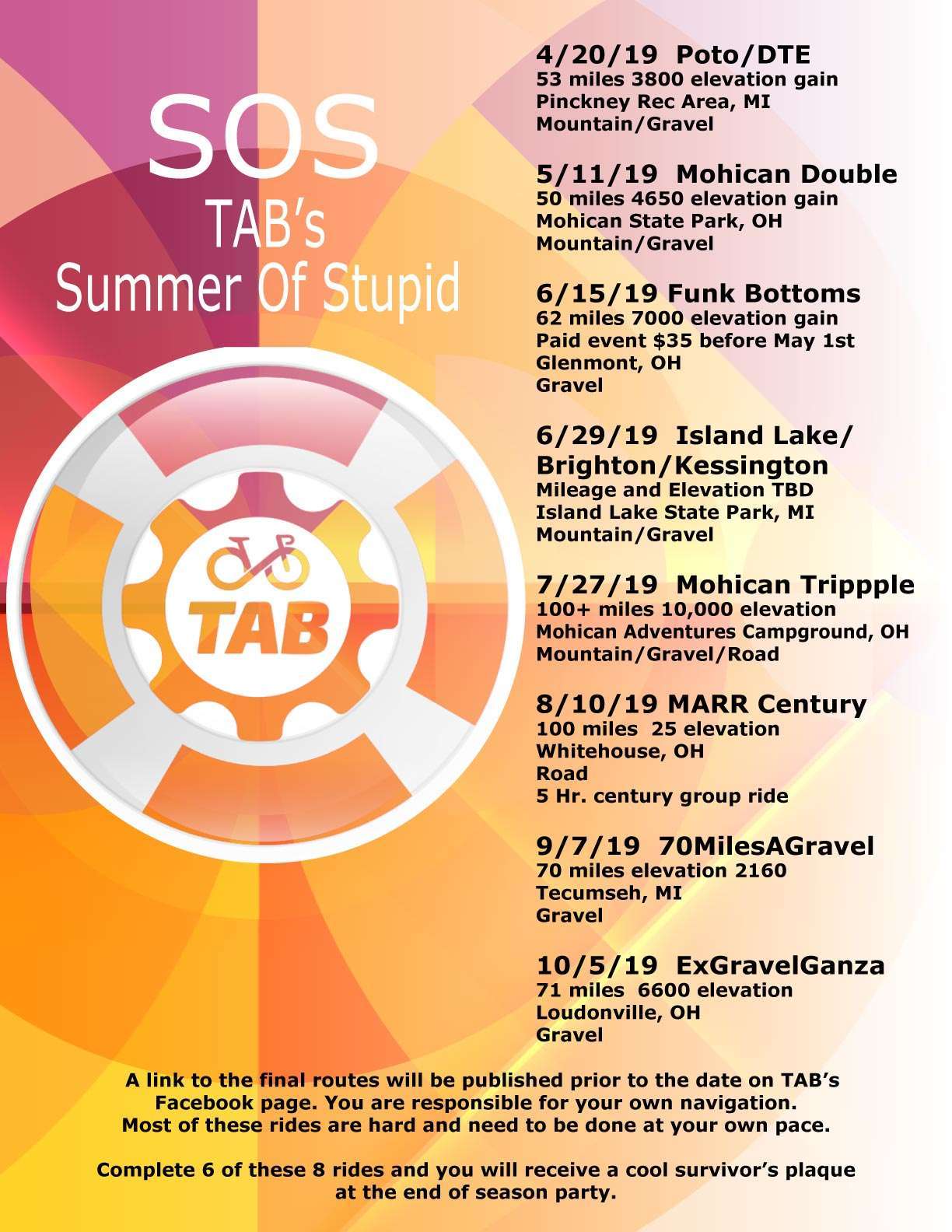 A link to the final routes will be published prior to the date on TAB’s Facebook page. You are responsible for your own navigation. Most of these rides are hard and need to be done at your own pace.

Complete 6 of these 8 rides and you will receive a cool survivor’s plaque at the end of season party.

8 brave or stupid people (fine line) showed up for the first Summer Of Stupid Ride.  We covered over 54 miles all on mountain bikes. This included both Poto and DTE for a total of 34 miles of mountain biking with a mix of gravel and pavement in between.  We had a brief lunch stop at the Unadilla Market and I made a stupid mistake....don't eat chicken wings on a long bike ride.  We had a great surprise when Chrissy Sarns showed up to ride after 4 months off and rode incredible well. Happy to report we had no mechanical problems or crashes.

Up next is The Mohican Double on May 11th.  This ride is no joke with a full loop of the Mohican MTB trail followed with a 25 mile gravel ride.    You will need all your gears and especially your brakes.  Great time to have your LBS give your bike a once over.  Several of us are camping at the State Park. Might be sights still available if you care to camp.  -Doug M

Ride #2 of SOS is in the books. A total of 12 riders this weekend and the level of stupidity was increased with special thanks to Rodney Palmer and Chris Holmes. Those two rode over 100 miles with an elevation gain of close to 12,000 ft.  We normal stupid people only rode 50 miles with an elevation gain of 5,800 ft. Up next, on June 15th, is the Funk Bottom. Ohio's Toughest Gravel Grinder!  You can sign up here.  http://funkbottomsgravel.blogspot.com/

The Mohican Trippple is the crown jewel of the SOS series.  Dan Willis and I came up with this idea 4 years ago and been having a blast sharing the suffering with our fellow cyclists.  Since our first try only 4 have completed this event.  This year was prominishing to be different.

12 riders showed up at 7am on a beautiful July day.  We all rolled out on the 24 mile MTB portion with smiles on our faces.  Chris Holmes and Rodney Palmer set a blistering pace and all but Chris Marquardt said see ya later.  (The Trippple is about survival)  All was going great and you have to remind yourself to slow down and just enjoy the forest.  At mile 8 the Knome Village reminds you that you have 16 more miles.

After a wicked decent at the covered bridge (the whole time I'm thinking about the 2 mile climb out) we ran into Kathy Sabiers Metzger Metzger, Caylene Holmes and Jennifer Simkus Marquardt who brought me my helmet.  I felt like a idiot and only realized after mile 3 of riding that I forgot my helmet.  Stacy Carson helped at home base making sure all were fed and hydrated. These 4 trail angels cannot be thanked enough for all the help and encouragement they provided to all the riders.

Then we had our only problem.  Tristan Hill had a tree jump out in front of him and clipped his handlebars.  He was ejected from his bike and ended up dislocating his shoulder.  He was in good spirits and it worked out well that the trail angles were in close proximity and helped him out.  At the ER they were able to put it back in and send him home.  This earned him the first door prize, the First to quit??.  Get well soon Tristan.  The rest of the MTB ride went without any major incidents.

The 27 mile gravel section with lots of hills is on deck next and it is a route that most are very familiar with.  Chris Holmes layed out the routes and I failed to notice that he reversed a section that had us climbing up Big Hill Road (actual name).  We all pushed on and I haven't found a hill I can't walk yet.  On a flat section of road Scott Lang said  "The only reason this is easy is so Chris can get us to a bigger hill."

The road portion was next and Chris put together another killer route of over 50 miles with climbs that seemed would never end.  St Route 603 climb to Malabar Farms, Pleasant Lake Dam, and the Covered Bridge climbs were all in the last 20 miles ending with the longest downhill in the area. During one of the descents, Scott lang won the second door prize of the fastest top speed.  When it was all done we ended with a total of 103 miles and almost 11,000 feet of elevation gain.

Thanks to Spoke Life Cycles for the door prizes. 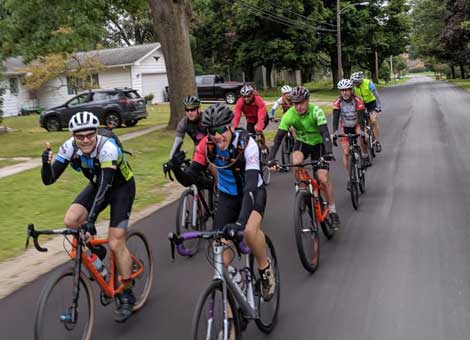 Here's the recap from Saturday's Intro to Stupid gravel ride, plus some info on upcoming gravel rides.

"Death by a thousands bumps." When the terrain has a bunch of hills that aren't all that tall or steep, they seem easy to punch up at the beginning. By the end, your legs are dead and you wonder why. The rolling landscape in the Irish Hills and Sharon Hollow area makes for some of the best gravel riding within an hours drive of Toledo. The many short hills are the best interval workout money can buy. The beautiful landscape takes your mind off the pain.

Nine riders showed for a fast and fun 70 miles from Manchester, MI. The bulk of the group was fast and experienced, and I kept up as long as I could. Average speeds were in the 15 to 17 MPH range, with rolling speeds of 19 to 21. The route was split into two 35 mile loops from Carr Park on the West edge of town. Other than a little washboard on Bethel Church Road, road conditions were awesome. Most of the gravel roads were packed and smooth. A few of the roads had some chunky gravel, but nothing to complain about. We hit some of the funnest roads in the area: Noggles, Taylor, Sylvan, Whelan, Bethel Church, Trolz. There are so many it's hard to keep track sometimes.

There are some cool gravel events coming up:

Edgar and I have been planning a gravel route from his cottage on 9/14. More details on that in another post.

Justin has offered up the Cannondale Topstone Carbon fleet to demo on 9/21. We ride from Hell, MI at 8am. There are 8 bikes available on a first come, first serve basis: small, medium, large, and extra large in both the AXS and Ultegra builds. I demoed the Ultegra build for the Chelsea gravel ride and it was fast and comfortable from the factory. The compliance from the seat-stay pivot and seat post make it a great bike for long rides. I didn't notice any unnecessary flex when pedaling hard and it handled sketchy descents like a champ. Shoot Justin P. Reynolds a message on Facebook to reserve a bike.

On 9/22, Monroe Cycling Club's Lake Erie Fall Ride has a 60 mile gravel route. There is a lunch stop at Luna Pier and a beer tent afterwards. I'll be leading a no drop group starting at 8am.

9/28 takes us to Morenci, MI for one of the easier gravel century routes in the area. It's a relatively flat course that begins to head downhill around mile 55. Bonus if the wind is out of the west. There are stops every 20 miles. If you are looking to do your first gravel century, this would be a great ride for you.

More to come in October as well. I will post more info the week of each event.